He does not retain His anger forever,
Because He delights in unchanging love.

A long discussion between me and my brother about the LOST finale. Don't read this if you haven't watched LOST. It will not only spoil the finale, but the entire run of what was the best TV show ever made.

Juggling and math are the same insofar as they're really tough until they're done, at which point they're trivial.

To be a little less aphoristic: both follow precise and invariant laws. Once the mind comprehends those laws (in one case through abstraction, in the other through muscle memory) there's nothing to it.

They're the opposite of stories, Umberto Eco's novel-as-a-lazy-machine, in which all the precision goes in at the front and a bunch of quanta of uncertainty stream out, to be lent precision by the observation of the reader. The clockwork goes in and the bird chimes out.

Which leads me to think that maybe people enjoy watching juggling because secretly they imagine themselves as the juggler, with all the uncertainty and humanity in the throwing and the catching, not the looking. While people write books because they first love to read.

My father's inheritance arrived in an aluminum urn, hollow in the center and heavy, dropped on the doorstep by the man in the brown uniform with a thick musky thud. Inside a teletype roll over a hundred feet long, dirty at the margins, covered with the ghost of words wrapped up on the inside, each following one another in the order he had planned on the paper and touching one another unexpectedly, incoherently as their orbits apposited within the paper's shortening circumferences.

The xxxx's, innumerable, crossed the circuit of the paper in constellations fading into the center of the roll and I remembered faintly the argument with the typewriter repairman who refused to sell me the three "x"-hammers my father had requested for his Underwood No. 5--Too rare, now, to sell in what passed for bulk in the typewriter world, and anyhow no one could ever have need for more than one replacement x--No one except my father, forever repentant of the last word written, striking out his errors with an anger that along with a misguidedly Marxist typewriter salesman necessitated the purchase and careful partial disassembly of three Underwoods, which now sit in a corner of my basement employed by three invisible monkeys to write stories that must never be set in Texas or deal in witches' hexes or invoke dominatrices who ever act alone.

His fingers (nine of them--the left fourth had been lost, to the dismay of my mother, shortly after their wedding and had joined the rogue crab-trap that claimed it in an unmarked Pacific grave) had never been of much use to him before his legs had stopped working. Thick and ropey and unsteady off the boat, he could outrun anyone off the ship but his strides were elliptical and snaked around a straight line like a swimmer in a cross-current, and when he played basketball against us as children his jump shot would list hard to starboard even as the ball steered straight to the hoop.

By the time the weakness became obvious he had long since given up the cage-hauling and unloading at the dock for the captain's chair and what he had called land sickness now left him reliant first upon two canes, then to a chair, and finally after his wife's numberless nights away from home and the numbered night when she did not return, to the nursing facility down the road from the factory processing plant where he had in better years sent crab and cockles and mackerel.

We visited them there in our last years at home when he was still himself, measuring the circumference of his legs and proudly showing us that for every inch of shrinking circumference in his legs he had gained it back in his massive arms. He began writing only in the last years as his mind left him along with his energy. The typewriter was a relic excavated from a recreation closet beneath strata of Scrabble and Risk and restored to function with the practice of a sailor accustomed to being stranded at sea.

I can estimate the hour he wrote any particular passage by the blackness of the letters--In his last years I would visit and sit as he sat speechless with the machine, typing furiously during the day amidst the noise of families the clatter of meals and softly at night, hammer barely glancing the ribbon before recoiling back as the weak and dying slept. My father was the end of rivers of coffee and as the tyrannical fatigue of his disease took over the better hours of his day he demanded more and more, downing wells of black thick espresso and popping aspirin for the withdrawal headaches when it wasn't available until one day during dinner he vomited bright red blood and the manichean balance was annihilated by his doctor's ban from either. I'm told that afterwards he somehow got a hold of a steady supply of benzedrine, and I can sometimes occupy a mile or so of my own sleepless nights by wondering whether he or his typewriter ate more paper.

I am the ICU screener. This normally means evaluating patients for whether they need the intensive care unit or are stable for the regular floor. For me it becomes a license to roam the hospital trying to fix everything I can.

I wake up around 8 AM and I drink six shots of espresso. Sometimes I buy two donuts from the street cart.

Usually something happens within the first hours of work. I often drink the coffee cold and the donuts stale. The caffeine and adrenaline send me across the hospital, floor by floor, placing IV lines, talking with patients, visiting the people I took care of for five or ten minutes yesterday and talking about things that are Not Hospital, or talking about things that are hospital and getting them water or mouthwash or an outside line to their son or daughter.

I come home and eat food that is not good for me very late; tonight I'm still waiting for it. Lately I've been taking big doses of B6 and melatonin--I read that they make dreams more vivid, and last night I just remember talking with an Irish girl and we agreed that we loved living in England because it was an island surrounded by angry seas.

I left late tonight; what was to be a quick IV line placement on an intern's patient became the realization that the patient was hours from death, her son unaware. We talked and after the talk I stopped all unnecessary medications, gave her a small amount of morphine and her labored breathing eased, then stopped. I wrote my note and now I'm at home and nine hours from now I'll be back at the hospital.

I've got absolutely no ambition beyond being able to continue what I'm doing now.

It's a great tragedy of New York City that the most beautiful views of the skyline are from across the river in New Jersey. 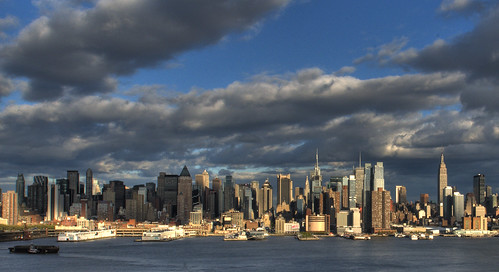 Though maybe what I mean by tragedy is the property of perspective. I can't appreciate the greatness of the place I live while I'm inside it, and I'll be sometimes unhappy when I'm gone and think about all the days I spent in the greatest city in the world without fully appreciating it.

I am doing other things beside teaching myself to write right-handed. I'm writing a paper on a man drunk on a mirror-image molecule produced by a normally beneficial bacterium, and contemplating a move to the far west coast and abandoning my beloved Manhattan, just like I gave up my dear desert for New York four years ago.

--Moving back to Michigan in June and beginning twelve months working at my hometown hospital and living in my parents' basement. The ratio of my salary to the square footage of my room is probably rivaled only by a few Tokyo junior Yakuza.

--Waiting to hear where I will spend the following three years of fellowship in pulmonary/critical care. The most likely possibilities (in order of probability) are Los Angeles, Manhattan, and nowhere.

I'm teaching myself to write right-handed. I'm guessing that this will change my thought patterns and personality, though that's secondary effect rather than primary intent.

Subspecialization is an age-spot; the bark thickens and moss grows up all around.

The very first tear he made was so deep that I thought it had gone right into my heart. And when he began pulling the skin off, it hurt worse than anything I've ever felt. The only thing that made me able to bear it was just the pleasure of feeling the stuff peel off. You know--if you've ever picked the scab of a sore place. It hurts like billy-oh but it is such fun to see it coming away.

--CS Lewis, The Voyage of the Dawn Treader 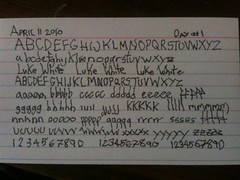